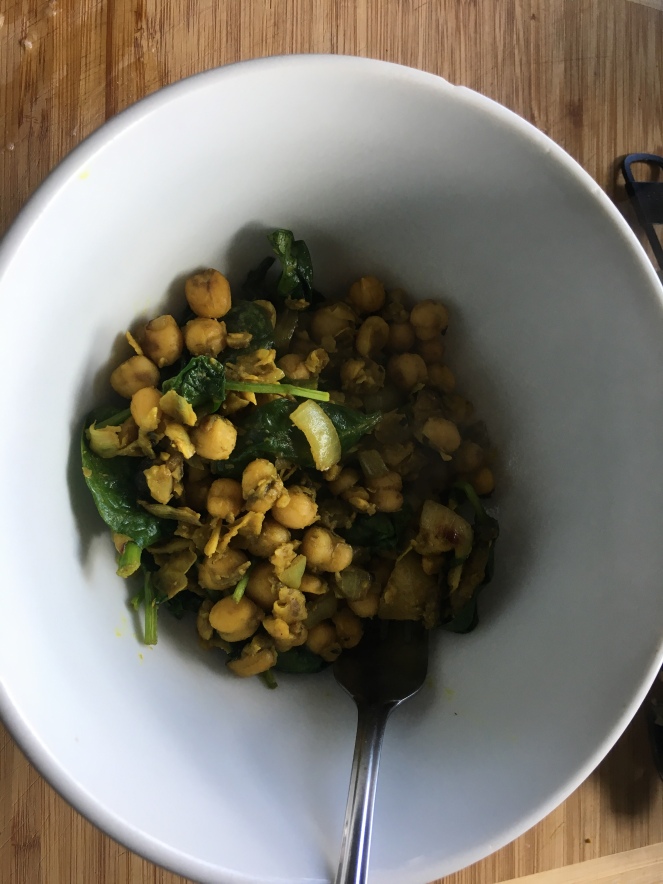 I have been meaning to try this recipe I found online for a long time and finally today I gave it a go. The original recipe, Chickpea Scramble with Swiss Chard, is a little different to the one I did today, as I didn’t have Swiss chard (or silver beet, as we call it here in Australia) or a fresh lemon, but it still worked out ok, even if I did improvise a little!

For future recipes, I will probably add less salt, or none at all, as I don’t always cook with salt and it didn’t quite suit my taste buds. Also, I will probably add less lemon juice or try fresh juice and see if this changes the taste at all. I love adding capsicum, tomatoes and corn to meals as well, because I love the colours and for some reason, having more colours makes it feel healthier for me, so I’ll probably do this too. Feel free to comment any adjustments you made and tell me all about it! 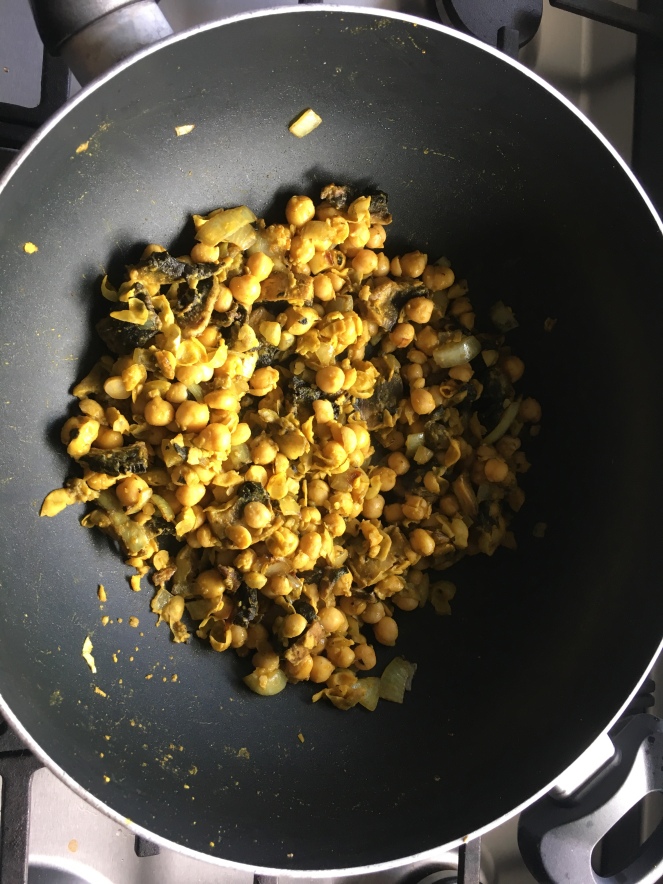 For information on nutrition and the original recipe, go to My Darling Vegan. 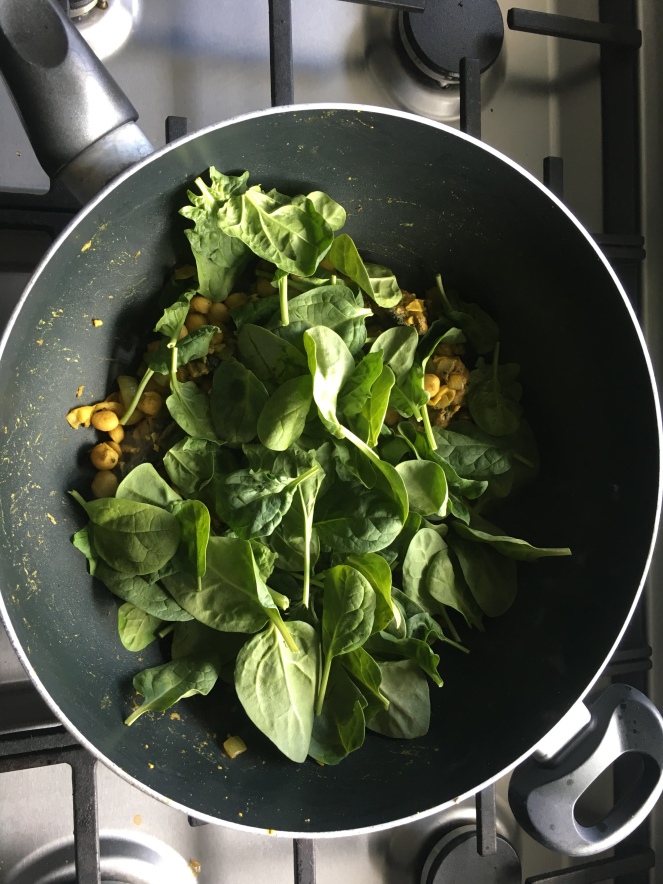 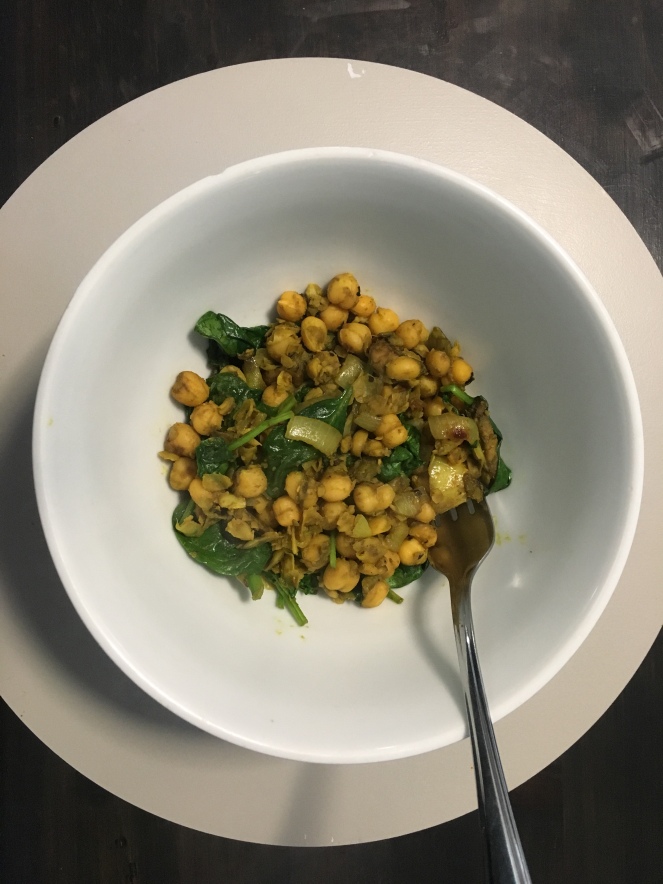 I always wanted to be the quiet vegan, the one that shared their knowledge with those close to them in the hopes of helping them to make the change.

I would share what I had learned and hope they joined me, comfortable with the fact that I had helped a little.

They would then share their knowledge and it would spread, quietly and efficiently across the globe. Word of mouth works right? Also, I can just lead by example, right??

This view has now changed after an enlightening conversation with an activist friend.

She was talking to another friend of hers about activism and trying to understand why her friend wasn’t an activist. Her friend answered basically the same as I would: I don’t want to be one of those pushy vegans. She too was quite happy just doing her own thing, confident in the knowledge that she was part for change.

Then my friend said something that would change my mind. Quite simply and lovingly, and for that I love her.

Her argument went something like this: if it wasn’t for all of those women getting out of their lounge rooms and fighting for what they believed in, we wouldn’t have the opportunities we have today.

The truth of this statement struck me, like a mallet to the chest.

In the past, I have connected with this energy, the collective of strong women who came before me, and it’s real and still exists inside of us today. I have had moments of intense gratitude for the women who came before, who fought for their rights so I could enjoy mine.

I just know my friend is right – if it wasn’t for them, I wouldn’t have what I have. If they had all sat on their bums in the safety of their own happy marriages, I wouldn’t be where I am today.

And the dichotomy is real. I have one grandmother who was treated with respect and love, allowed to do what she wanted when she wanted, who had control of the money and the house, who was effectively the boss of her home. I also have another grandmother who was raped and beaten on a regular basis by a drunken husband and had to watch as her kids were beaten as well. This grandmother is now completely deaf in one ear because of the abuse she suffered. I know all too well the extremes of the patriarchy.

If it wasn’t for the women who had the courage to stand up, I probably would not be here today, as at least one grandparent could have been beaten to death. If she didn’t have the courage to fight for her own right to be safe and those of her children, to stand up for her beliefs, my life would be totally different.

So I made a choice. If not for the animals themselves, then for all of the activists that came before me, for women’s rights, against racism, to end Apartheid, against slavery. If these people didn’t stand up for what they believed in and had the courage and strength to make this world what they believed it should be, our world would be much different and I have nothing but respect and gratitude for them.

I believe we do not need animal products to be healthy.

I believe that to subjugate and exploit any being, to do things to them without consent and against their clearly visible will is wrong.

I believe that we need to stop animal abuse, because for me, all life is sacred.

So I’m going to start on my activist path. I’m not one to jump right in the deep end, I’m going to test the waters of some groups and see which one is the best fit. I’m going to give my time the best way I know how to promoting Veganism and helping to end animal abuse. This might mean simply volunteering at vegan events or it might mean holding banners outside of rodeos, who knows?

I am going to devote more time to being active in what I believe in.

For the animals and in the memory of all of those people who came before me and helped shape the world we live in.

I am also thinking I will include women’s rights to this list, but I’ll see what the universe sends my way. 😁

I have recently celebrated my first vegan anniversary, my Veganniversary. It has and continues to be an interesting journey.

Other things happened that I wasn’t expecting. The negative reactions to my choice. The amount of ‘assumptions’ I had about diet. That people continue to accept these assumptions, despite my best efforts to the contrary. The judgement both inside and outside of the vegan community.

Most of all I wasn’t expecting the spiritual side of me to gain momentum. I have been on a spiritual journey for at least 5 years, intentionally cultivating my skills and growing as a person. Not in all that time have I had such profound and fast changes inside of myself and with my skills.

These are some areas in my spiritual life that have changed in the last 12 months:

I hope I have explained this last one effectively. All of these changes have lead me to a deeper connection to myself and Spirit, whether it be my guides, angels, deity or whatever the reality of Source actually is. I feel way more connected in general and I can only attribute it to the change in diet. Doreen Virtue talked years ago, in a book I can no longer remember the title to, about the negative effect of meat on your vibration, I just didn’t think it could be this amazing.

Please, if you have experienced similar or different changes, I would love to hear about them. 😁

Today marks my first anniversary of deciding to commit to ‘this vegan thing’.

I’d done Veganuary and felt confident that I was on the right track. My reasons started out based on health, but over January 2017 had evolved into ethical and environmental ones.

My eyes were open and there was no going back.

To mark my 1st Veganniversary I thought I’d share my new found truths.

What I’ve learned along my Veganism Journey

I am sure there is plenty more that could and should go on this list, but these are the stand out lessons for me!

Let me know what you’ve learned on your journey and let’s see if we can’t spread the word together!!

And for whenever yours is…

Good night from cartoon me! 😂
I’ve been listening to your podcast, @thesaraholiver and @thepaulbianchi and I know how much Sarah loves unlikely animal friendships. This is Nero my cat, and Mystie my Mum’s dog. They play like this everyday!! Btw, love your podcast, I actually laugh out loud when driving! It brings me such joy on my long drive to work! Looking forward to the Norse ones! #mythfits #mythunderstoodpodcast #unlikelyanimalfriends #furbabylove #Neroisascrazyashisnamesake
Best moment of my life... #hatshepsut #girlpower #egypt2019
So this happened today... 😁🇪🇬 #touristphotos #sphinx #finallymadeittoegypt #dreamcometrue
Vegan lasagne!! Oh, how I’ve missed you... So yummy!!!! 😊 #whatveganseat #veganlasagne #veganforlife #veganfood
Happy Birthday @jesusofthememes !! 🎂🎁💜🍰